IOM survey: One-seventh of those fleeing the war in Ukraine to Slovakia expect to stay

IOM survey: One-seventh of those fleeing the war in Ukraine to Slovakia expect to stay

According to IOM Slovakia data, sixty two per cent of the respondents who fled Ukraine to Slovakia indicated they would return to Ukraine once it was safe, while twenty per cent did not know their long-term intentions and fourteen per cent expected to stay in Slovakia.

These data were published in IOM Slovakia fifth rapid needs assessment report on 5 September 2022. The report is based on the analysis of 1,298 face-to-face interviews conducted by the IOM’s Displacement Tracking Matrix (DTM) team between 9 March and 11 August 2022 with Ukrainian refugees (99 %) and third-country nationals (1 %) arriving to Slovakia at two border crossing points, two registration centres and one hotspot. 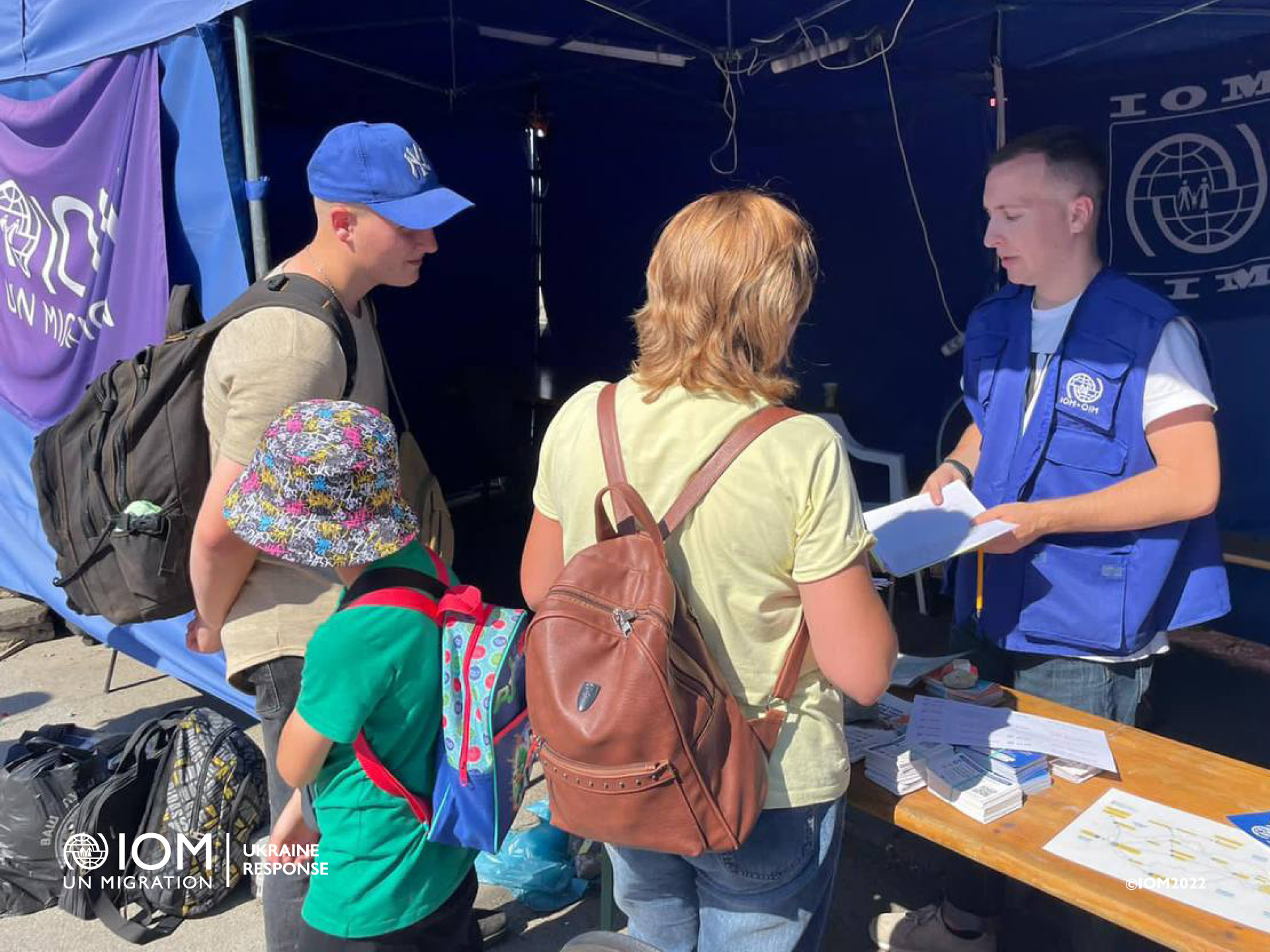 An IOM consultant at the Vysne Nemecke border crossing is providing assistance to a family fleeing the war in Ukraine. Photo © International Organization for Migration (IOM) 2022.

Women and girls accounted for eighty-four per cent of all respondents in the sample. The average age of the women surveyed was 41 and 45 for men. Over a third of the interviewees were women aged 40-49. The top five regions of origin were Kharkiv (20%), Kyiv (18%), Donetsk (12%), Dnipropetrovsk (9%) and Zakarpattia (6%).

Consistent with previous reports, most of the people interviewed were travelling in a group (78%). Men tended to travel alone more often than women. The average size of the group was four. Sixty-three per cent of the respondents travelling in a group travelled with at least one child, thirteen per cent travelled with at least one older person, and three per cent with a person with a disability or a serious health condition.

The most urgent needs

Most respondents (71%) reported support in communication with close family and friends as their most urgent need. The other top needs were financial support (66%), transportation (57%), documentation and legal support (55%), food (47%), support with employment (47%), and accommodation (45%).

For those travelling with at least one child or elderly person, the top four most urgent needs were the same as those mentioned above -- communication support (71%), financial support (69%), transportation (61%), documentation and legal support (51%), while employment support (50%) was ranked fifth.

This represents a notable change in the order of priorities since the last round of surveys for those travelling with at least one child or elderly person, where food, financial support, communication support, transportation and education were the top five urgent needs.

Slovakia was the most common intended destination for seventy per cent of respondents which is a three per cent increase compared to the previous report. Around twenty-four per cent of interviewees indicated another country in Europe (Germany was indicated by 38% of this group of respondents, followed by Czechia, Poland, Switzerland and Italy). The most common reasons for choosing another European country were having family, friends, accommodation or better protection systems there.

Type of support received in Slovakia

The majority of respondents (69%) reported having received support in communication, followed by documentation and legal services (52%), transportation support (52%), food (51%) and accommodation (28%). Cash remained the preferred form of support (87%), followed by in-kind assistance (12%).

The needs for which there was the least provision were: support to return home, psychological counselling, employment and education.

With the support of:

The IOM’s DTM activities in the region were made possible with financial support from the Council of Europe Development Bank, France, German Federal Foreign Office, Government of Japan, Government of the Republic of Korea, Norwegian Ministry of Foreign Affairs, Swiss Agency for Development and Cooperation, and United States Bureau of Population, Refugees, and Migration

This activity was generously funded by the U.S. Department of State Bureau of Population, Refugees, and Migration.