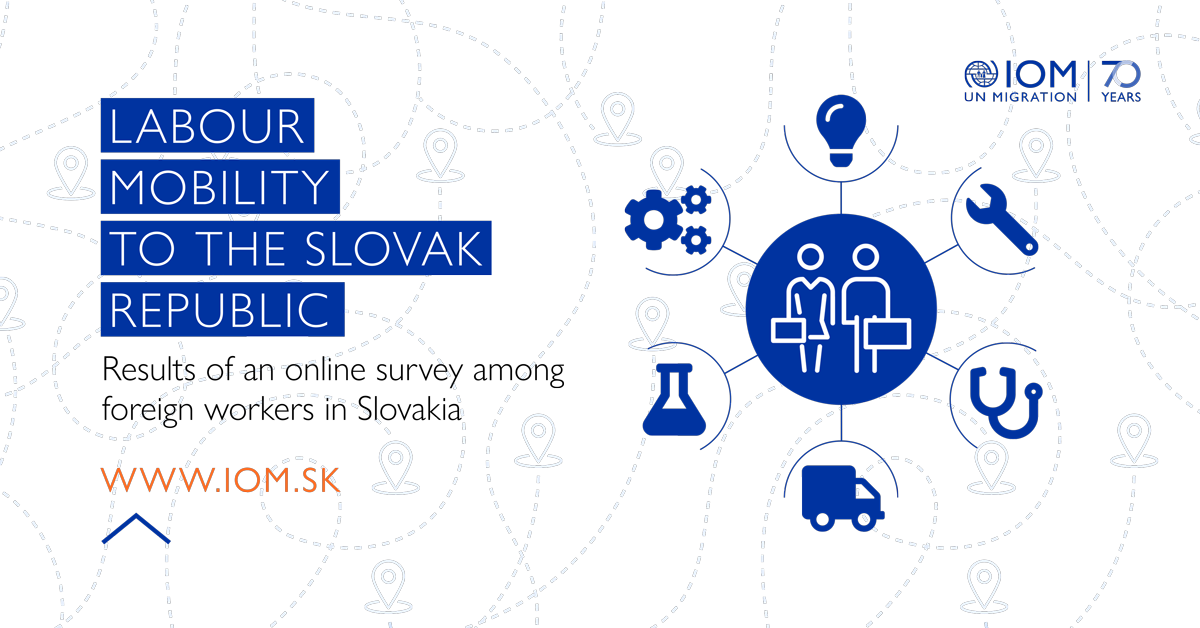 It results from an online survey on labour mobility conducted by the International Organization for Migration (IOM). The survey targeted the non-EU/EEA nationals who were employed in Slovakia at the time or in the past 2 years. IOM evaluated responses from 352 respondents from more than 50 countries who lived in 29 districts of Slovakia.

The results of the survey are also supported by the statements of foreign workers provided in a moderated discussion carried out by IOM (together with the mentioned survey) within the project Technical Support for the development of a Labour Mobility Scheme for the Slovak Republic. The results are also supported by the common experience of the clients of the IOM Migration Information Centre (IOM MIC).

Next, you will learn:

What kind of work is taken up by foreigners in Slovakia

56.8% of respondents do not work in their field of the study.

Foreigners living in Slovakia are willing to accept a job that does not match their main qualification or does not require any specific qualification.

At the same time, the employment of foreigners in the field outside their professional education may also indicate that the job offer itself is not the main reason for their arrival in Slovakia.

What motivates foreigners to come to Slovakia

More than 57% of respondents did not identify Slovakia as their priority choice when they decided to migrate for work.

The main reasons behind their decision to choose Slovakia as a destination country are that they consider the country to be safe and the fact that the country is a member state of the European Union (EU).

The feeling of cultural proximity, language, geographical proximity to their country of origin or the mere fact that the foreigners already have a family or friends living in Slovakia resonated among other important aspects behind their decision to choose Slovakia. Their answers indicate that the original motive behind their decision to arrive to Slovakia was other than the prospect of employment and only subsequently they gained access to the Slovak labour market.

In addition, a large group arrived for no specific reason, for example, they took the opportunity and accepted a job offer in Slovakia.

How do foreigners search for a job in Slovakia

Foreigners coming to Slovakia most often searched for job offers themselves – through job portals or social media.

Where do they get information on how to obtain a residence and work permit in Slovakia? One third of respondents reported that they got the information directly from their employers. Each of the following three sources was identified by a quarter of respondents: the official websites of institutions such as ministry of foreign affairs, ministry of labour or ministry of interior, recruitment agency and the IOM Migration Information Centre. One-fifth of the respondents identified social media, e.g. Facebook and VKontake, as their source of such information.

Most respondents obtained their residence permit themselves (33.81 %), others benefited from assistance provided by their employer (29.98 %), agencies (21.88 %) or with a help from their family or acquaintances (15.34%).

Reasons why foreigners decide to stay in Slovakia

Contrary to the widespread opinion that the foreigners do not consider Slovakia as an attractive country for living and they rather use it as a gateway to the European Union, more than 86% of respondents want to stay in Slovakia in the near future.

As a reason, respondents most often cited satisfaction with housing and living conditions in Slovakia, good job opportunities and the possibility of family reunification – whether it is with a Slovak partner or with their family members who would come to Slovakia to be with them. Another important reason is that they consider Slovakia to be a safe country.

What experience do foreigners have with services in Slovakia

According to the evaluation of the quality of services and access to services in Slovakia, foreigners have the best experience with official interpreters, recognition of education and qualifications and provision of residence permits for family members.

The communication with local institutions and the length of the immigration process, which is perceived as too bureaucratic, turned out to be the lowest rated. Foreigners who participated in moderated discussion had similar experience and reported that their employers have a hard time understanding the processes of granting a residence permit and they also consider it to be excessively bureaucratic.

Respondents also reported that it is difficult to find a suitable general practitioner in Slovakia. The participants of the moderated discussion named several possible causes for this difficulty: a language barrier when searching for a suitable GP, lack of knowledge about the Slovak healthcare system and insufficient willingness of some doctors to accept foreigners as their patients.

The first time I moved to Slovakia due to a transfer within my company, later I settled in Slovakia on my own. I thought the process would be easier, but I found out that even the company that helped me to relocate was struggling a little with bureaucracy and documentation.
Moderated discussion participant

The process of processing applications for a residence permit took about five months before all documents were accepted. So I basically waited five months without being able to work. I already had a job offer, but I couldn't accept it until I got my residence permit.
Moderated discussion participant

Do foreigners feel integrated into society?

In the moderated discussion, opinions on integration turned out to be less optimistic – even among those who have lived in Slovakia for more than 10 years. Some do feel accepted over time, although they have had to make a lot of effort to be accepted by the host society. Others have positive experiences and good relations with people in Slovakia. However, in regard to the state institutions they lack the same approach as they have to the domestic citizens. Part of the participants was also aware of the stereotypes about foreign workers as cheap labour. They consider discrimination to be a problem that limits their integration in Slovakia.

Statistics on employment of foreigners in Slovakia

According to statistics of Central Office of Labour, Social Affairs and Family of the Slovak Republic there was almost 68,000 foreigners employed in Slovakia in May 2021, while almost 38,000 of them were from the countries outside the EU/EEA. According to data of Statistical Office of the Slovak Republic on employment there were 2,391,600 workers in Slovakia in the first quarter of 2021 (after deducting the people working abroad). Thus, there is currently one foreign employee per 35 domestic employees.

The largest number of non-EU/EEA employees came from Ukraine, Serbia, Vietnam, the Republic of Korea, Bosnia and Herzegovina and the Russian Federation. Most of them have secondary vocational education and work mainly in production as operators and machine and equipment assemblers, auxiliary personnel or skilled workers and craftsmen.

More information about the IOM Survey

The online survey was conducted by IOM in September and October 2020 within the project Technical Support for development of a Labour Mobility Scheme for the Slovak Republic. The survey data was collected through a questionnaire that was available in English, Russian, Serbian and Ukrainian language.

IOM evaluated the responses of 352 respondents from more than 50 countries who were staying in 29 different districts of Slovakia at the time of the survey. The largest group was comprised of people aged 31 to 40 years (38.9%) and the highest number of respondents came from Ukraine, Serbia, the Russian Federation, Turkey and India. There was 54.8% of male respondents and 44.6% of female respondents in the evaluated group (0.6% did not give an answer).

In December 2020, IOM also conducted a moderated discussion with foreign workers from five non-EU/EEA countries in order to obtain qualitative data and to better understand their experience working in Slovakia.

The Technical Support project in the preparation of the Labour Mobility Scheme for the Slovak Republic is funded by the European Union through the Structural Reform Support Programme and implemented by IOM in cooperation with the European Commission.