In November and December 2013, IOM Bratislava organized in Nitra and Trnava two more workshops for the employees of state and self-government institutions who come in their work to contact with migrants. They gained information about the amendments to the Act on Residence of Foreign Nationals and Act on Employment Services, presented services provided to migrants from third countries by their offices and exchanged experience which will help them in work with migrants. 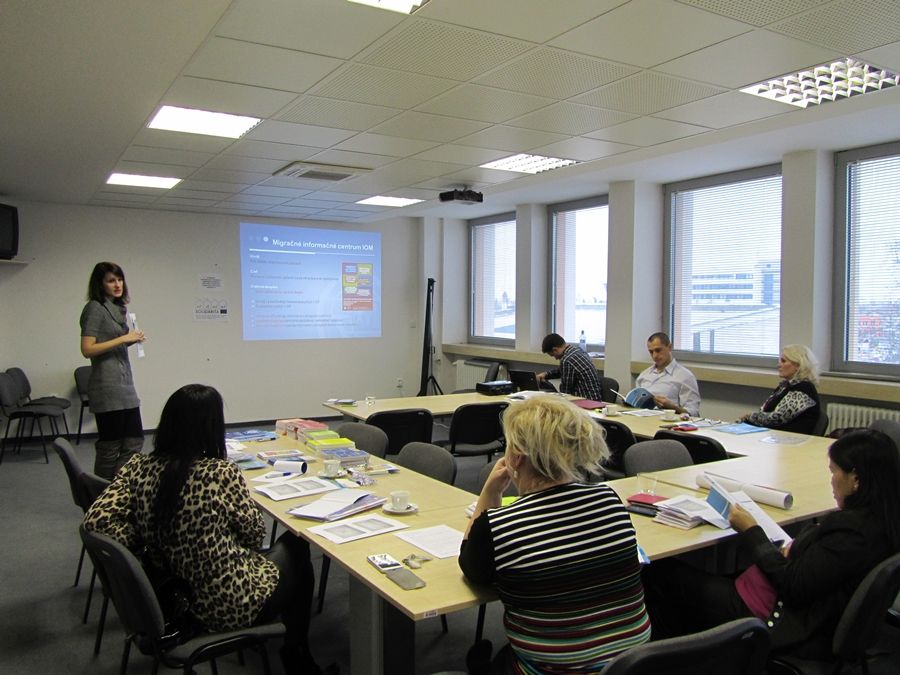 Workshops form the second part of the IOM training program about migration, integration of migrants, intercultural skills and improvement of cooperation. They build on the trainings organized by IOM in October 2013. Altogether 12 participants took part in the workshops in Trnava and Nitra, namely employees of local Foreign Police Departments, Offices of Labour, Social Affairs and Family, District Offices, Labour Inspectorate Nitra, Municipal Offices and a health insurance company.

Workshops were connected with counselling days for migrants. Migrants could have their questions answered in one place by the employees of the Foreign Police Department, Labour Office, Department of State Citizenship and Registry Office and Trade Licensing Office of the District Office and a lawyer from IOM Migration Information Centre. Migrants from Ukraine, Russia and Haiti came to counselling days in Nitra and Trnava to get information about residence, ways of obtaining Slovak citizenship, contracting a marriage and employment in Slovakia.

IOM Bratislava will organize in the first half of 2014 two more trainings and six workshops.

Trainings and workshops are organized within the project: Enhancing Intercultural Competencies and Regional Cooperation of Professionals working with Migrants in the Slovak Republic IV (individual project). The project is co-financed by the European Union from the European Fund for the Integration of Third Country Nationals. Solidarity and Management of Migration Flows.