In Search of Home: Mariia Finds Safety in Slovakia After Fleeing Ukraine

In Search of Home: Mariia Finds Safety in Slovakia After Fleeing Ukraine

Mariia, a 25-year-old public relations manager, used to live in Kyiv together with her husband, Sasha. They both worked and lived to the fullest in the city, but when the COVID-19 pandemic hit, they decided to move to the countryside, to a quiet village on the outskirts of Cherkassy. 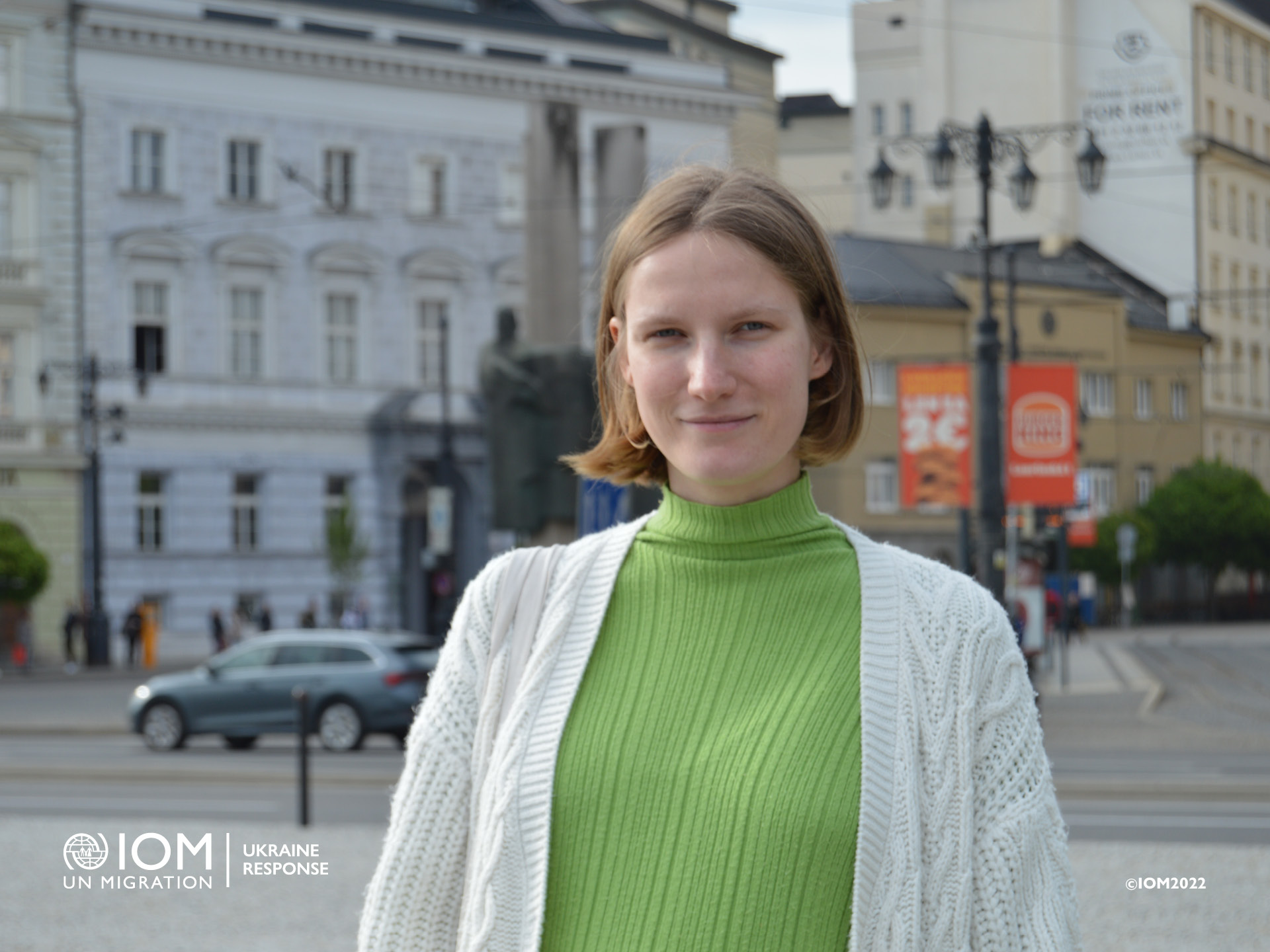 “I worked as a freelancer and lived in the countryside, where Sasha and I were breeding ducks and chickens and just enjoying life.”

In one moment, everything changed.

Mariia remembers the night before the invasion of Ukraine; she couldn’t fall asleep. They had already expected that the war could begin at any time, but that night, she felt something was off. At 5:30 am, her husband called and confirmed their worst nightmare: “The war has started.”

For Mariia and her husband, this was an Earth-shattering wake-up call. Considering the calm of their village, they decided to offer their house as a safe base for other families. Many people came – women, children, friends of their friends, people that they didn’t know – and they welcomed them all into their home. At the peak, they had 17 guests, including five pets, living in their house.

“The war was real. We had to help,” explains Mariia. 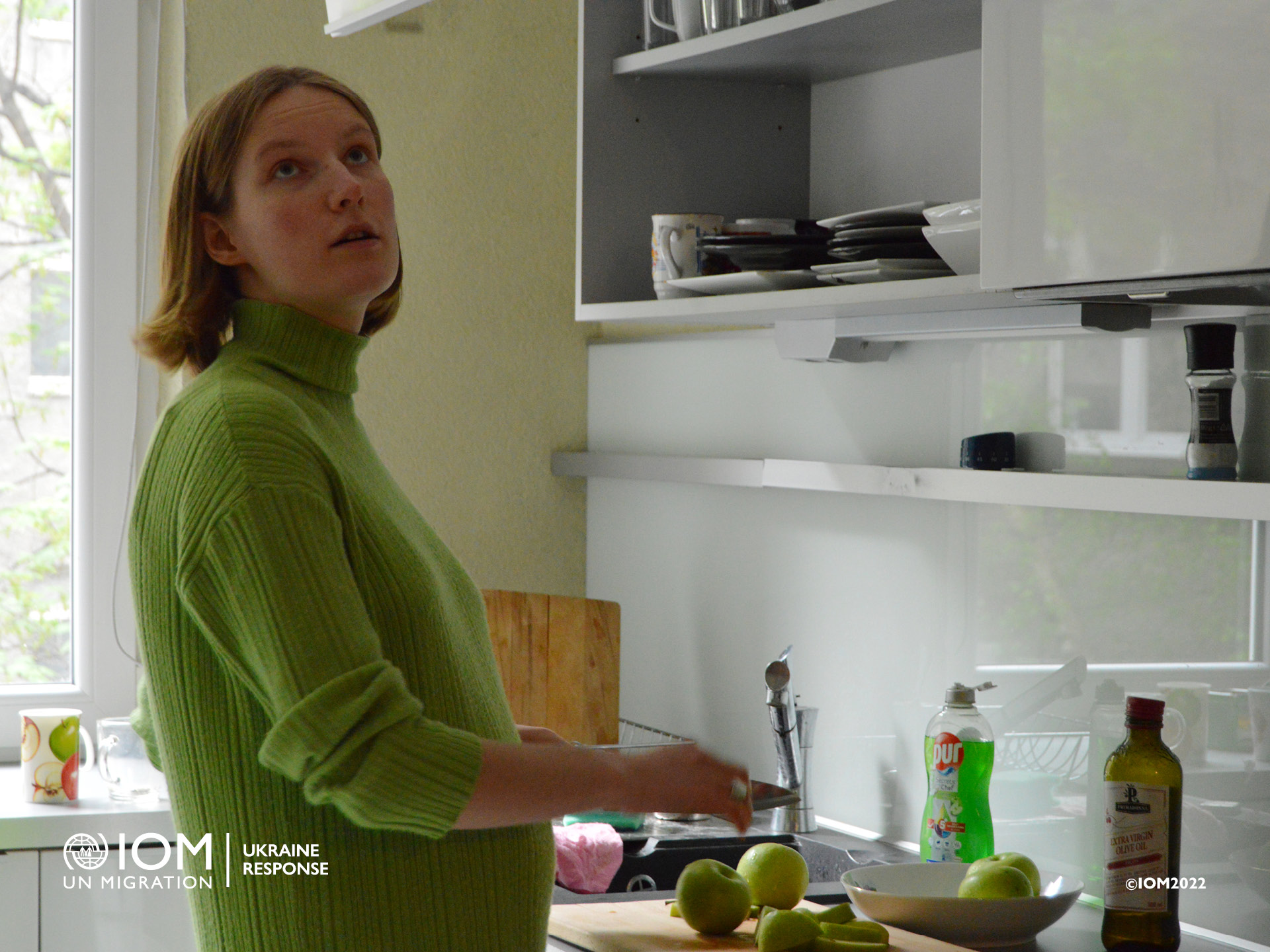 Before fleeing Ukraine, Mariia hosted up to 17 guests in her home, including children. “Hearing the air fighters, sirens – these are things children do not need.” Photo: © IOM/Barbora Kratochvilova and Kristina Tokac.

Mariia recalls many difficult and frightening days. “We were in rooms all stuffed like sardines, waiting until the sirens passed,” she says.

In the beginning of March, they learned of the possibility that Russian troops might head towards the Kaniv Hydroelectric Power Plant close to Mariia’s village. She and everyone living in her house decided it was time to leave the country. “If the dam exploded at night, we would drown and never wake up,” she explains.

Each person prepared a small backpack with essentials. “You cannot take everything that you have in your house, all your favourite things. You simply leave this all behind,” says Mariia, remembering the heart-breaking day they were forced to leave their home.

Mariia remembers how she wept as they made their way towards the Moldovan border on 6 March. She had asked her husband not to go to war because in a few months they would become parents. Through tears, she recalls the words she said to her husband when they parted at the border: “If something happens, I will name our son in your honour.”

After driving for 14 hours, Mariia and her husband’s family arrived at the border with a tremendous queue ahead of them. The situation on the border was very emotional, she describes – children and wives agonizingly parting with their fathers and husbands. 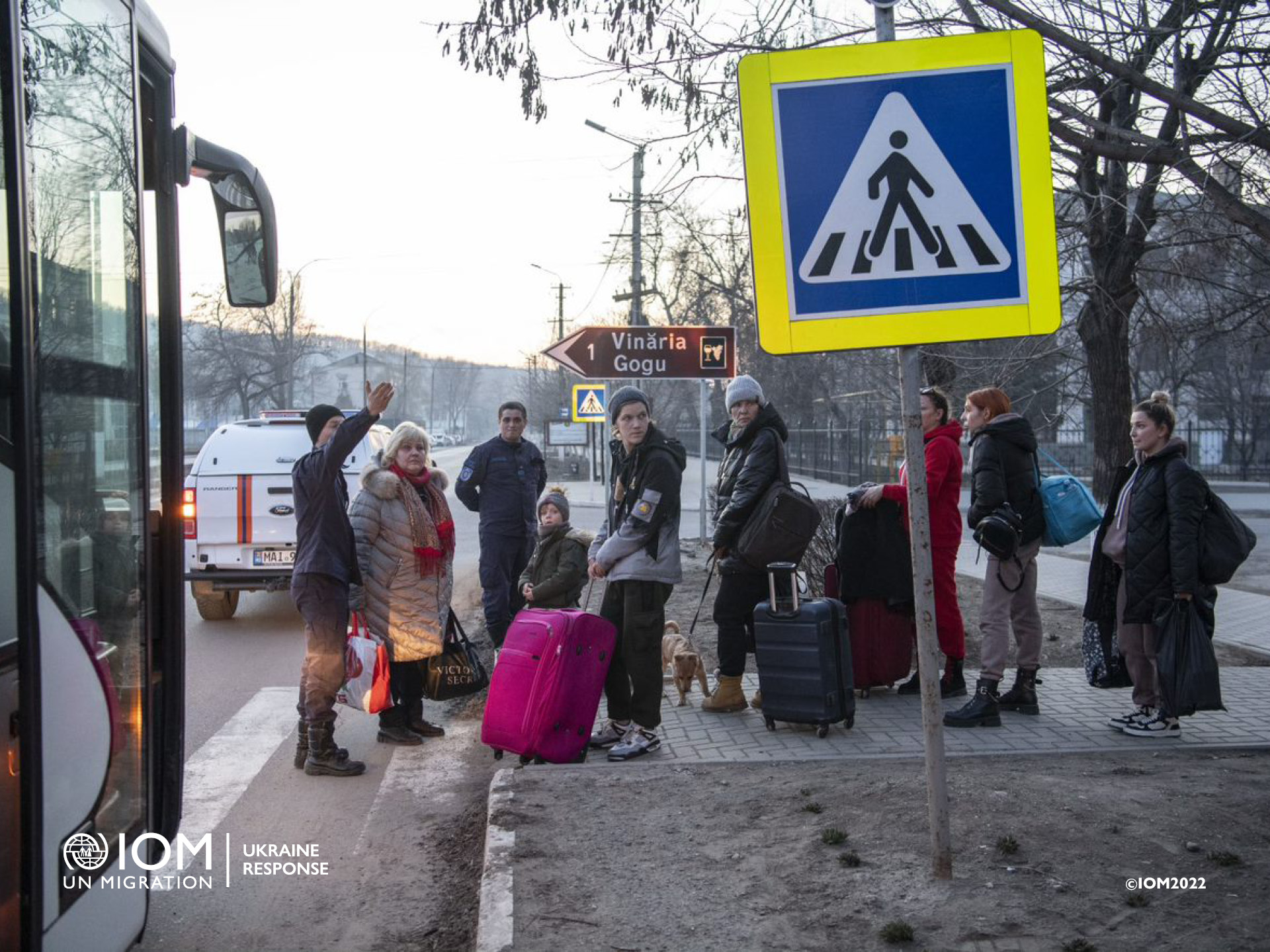 Mariia is one of over 450,000 people who fled Ukraine into Moldova. Photo: © Alissa Everett.

After crossing the border to Moldova, they drove for an hour only to realise that they had no energy left to continue. After a short nap in the car, they gathered the strength to continue their journey further to Romania, their destination.

The transition was difficult for Mariia, who by now was six months pregnant. They stayed in Romania for three weeks, but her husband’s family decided it would be better to continue onward to Belgium.

For Mariia, though, moving even further away from home was unimaginable. As her family stopped in Bratislava on their way to Belgium, she decided to end her journey there, in the capital of the Slovak Republic.

Mariia needed a place to stay, and learned from a friend about the Airbnb.org short-term housing project. Thanks to an ongoing partnership with Airbnb.org, the International Organization for Migration (IOM) is able to provide free short-term housing in Romania, Poland, the Republic of Moldova, Hungary, and the Slovak Republic to anyone fleeing the war in Ukraine.

“My friend sent me some links, and I contacted the Airbnb office. My request was forwarded to IOM in Slovakia. This is how they found me Martin´s apartment. Martin owns a two-bedroom apartment in the centre of Bratislava, and what was important was that I could move in with my cat. It was a super quick process.” 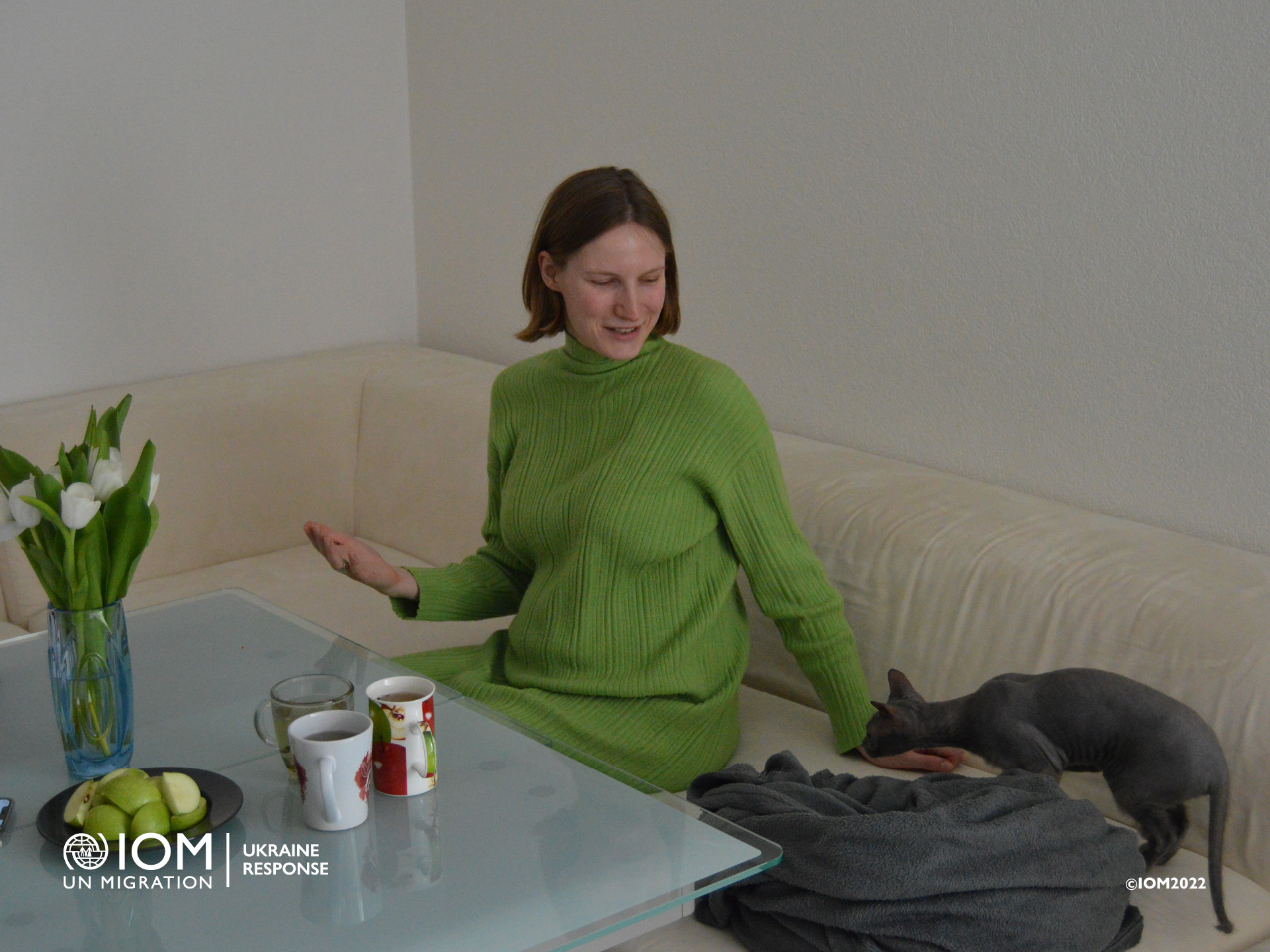 Through IOM’s partnership with Airbnb.org, Mariia found a safe place to stay in Bratislava, Slovakia – a temporary home amidst the war. Mariia describes her cat as her much needed emotional support. Her presence helps her to through these tough times. Photo: © IOM/Barbora Kratochvilova and Kristina Tokac.

For Mariia, regular doctor’s appointments were particularly important to ensure that her baby was in good health. The apartment’s central location made it easy for Mariia to access all important services.

“IOM staff helped me with all my questions concerning healthcare and how to receive temporary refuge,” she says.

Today, Mariia is full of gratitude. “We are so grateful to this country and all the countries that support Ukrainians – some with donations, some with food, some simply take in people. Everyone is really trying to sympathise with our situation.”

Even though her situation has improved, her desire to reunite with her husband has not wavered, drawing her back to their homeland. “I have a loving husband who wants to see and raise his child. The place where we live is quiet. That’s why I decided to go back and give birth to our son there.” 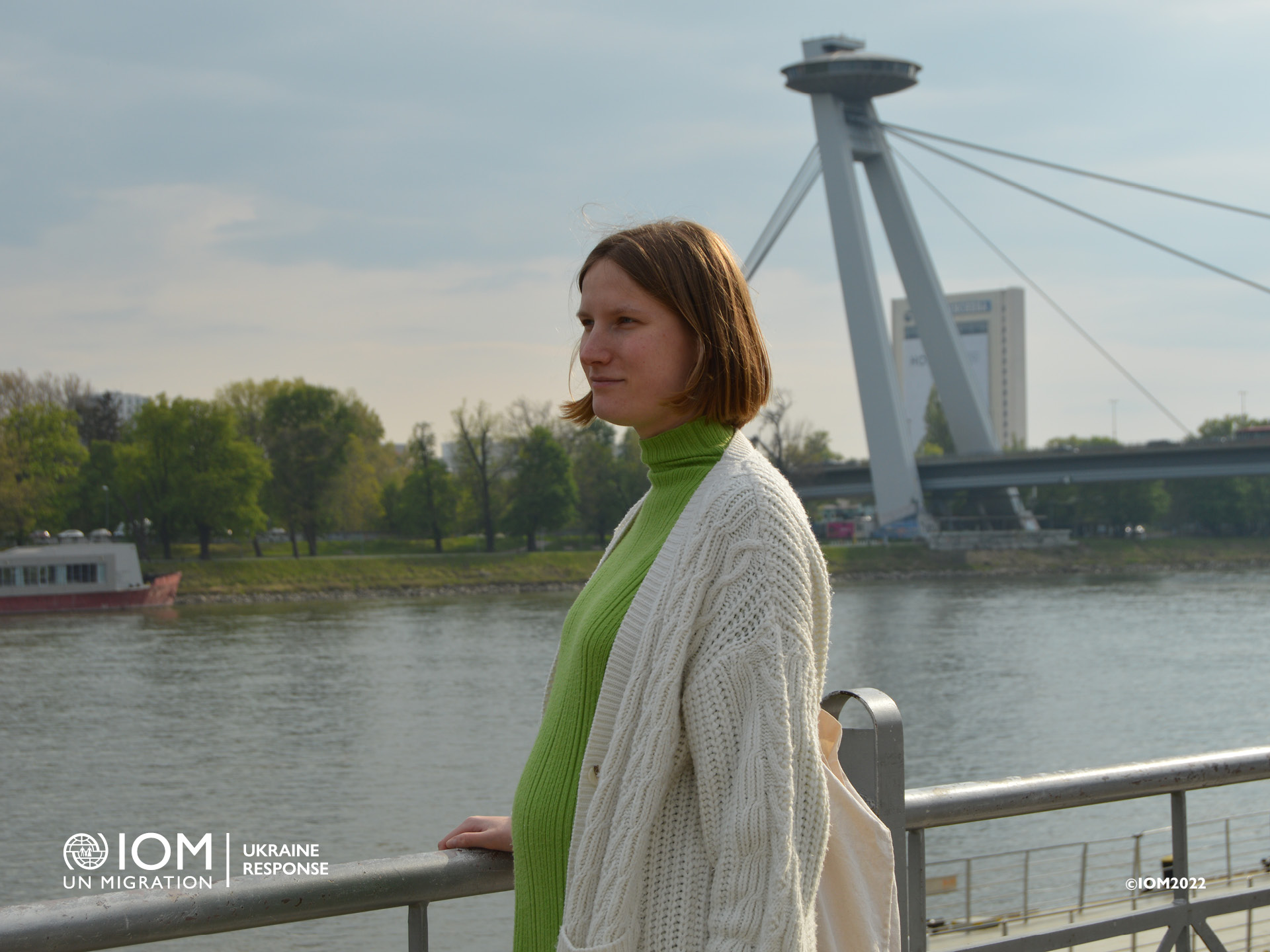 While in Bratislava, Mariia enjoyed walking along the Danube River, which reminded her of the Dnipro River back home. “One of the most valuable lessons I learned is to start valuing everything in life; every hour together.” Photo: © IOM/Barbora Kratochvilova and Kristina Tokac.

As Mariia prepares for the journey back home, she recalls all the family members she bid goodbye to along the journey. She doesn’t know when they will meet again. “Maybe in two months, maybe in a year, or maybe never again,” she reflects.

“If I learned one thing from this experience, it’s that we shouldn’t delay anything in life. Value every hour together because tomorrow may not come.”

If you have been affected by the crisis and need support, please call one of IOM’s Hotlines.

If you are interested in opening your home to support this effort, you can learn how on Airbnb.org.

If you are interested in funding or donating, please check IOM's Flash Appeal and fundraising page.